Home | homeschool | Tales From an ’80’s Homeschool: The Arrest

Police officers knocked on our door at 7:00 a.m. Mom refers to it as a rude awakening. A very apologetic deputy informed my parents that they were under arrest for truancy. He needed to take them to the County Sherrif’s office.

My parents immediately called our Pastor. The Pastor went to inform my aunt Kari, who lived across town, that the deputy was on his way to her house, since she didn’t have a phone. Kari remembers that she grabbed her Bible, a toothbrush, and a sweater, because for some reason she remembered hearing that it was cold in jail!

The Pastor’s wife volunteered to keep all four of us kids, (my sister and I and our two young cousins) and the pastor drove my parents and Kari to the jail.

Mom and Daddy were members of Home School Legal Defense Association, so phone calls were quickly made. John Eidsmoe, who was a professor of law at Oral Roberts University at the time, took Kari’s case at no charge, since she was a widow. Michael Ferris, John Whithead, and Charles McLaughlin were all involved.

The legalities of homeschooling were a big deal at this time, as homeschooling had begun to grow in popularity. At the time, there were 7 homeschool defense attorneys in Texas. But no one expected a problem in Oklahoma. Oklahoma was, and still is, one of the best states for homeschooling, so this was unheard of!

As I mentioned in The Beginning, Daddy worked for the county Sheriff’s office. He had been there for about 6 months when he was suddenly fired without warning and without explanation. That had been three days before.

Bail was set for $200, which our Pastor graciously paid. So Mom, Daddy, and Kari were fingerprinted and processed, but never locked up. They spent the day in the Sheriffs office while the attorneys were contacted.

The court date was set for January of 1984. In the meantime John Whithead called the Oklahoma Attorney General and the State Legislature. Kari got a phone at her house in order to keep up with the case. We visited with the attorneys handling the case. Our families even went to the home of Kirk and Beverly McCord. All of the children were questioned privately to prepare us for the court proceedings.

In December, Kari received a phone call from another Oklahoma homeschooler who said that 300 other homeschoolers were planning to march at the courthouse where the case would be heard. She was so happy just to know there were other families who homeschooled in Oklahoma!

Just days before the case was to be tried in court, the Terral School Superintendent dropped the case. He even came to our home and apologized to my parents for the inconvenience. Kari did not receive a letter or an apology. 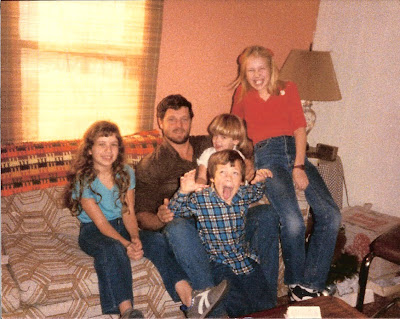 I was 11 years old when this happened. My sister was 8, and my cousins were 7 and 4. The photo above is the four of us with a fellow church member who had come to do “chapel” with us. (By the way, my cousin Jessie, the only boy, hasn’t changed a bit!)

What I remember is the fear of having police officers knock on our door so early in the morning, and finding out that they had come for my parents.

I remember spending the day at the Pastor’s house, waiting for my parents to come home. I did have some worry that they might have to stay in jail. We had only been homeschooling for just over a month, so it was scary to think they had done something really wrong.

As far as my Dad recalls, they were the first to be arrested for homeschooling in Oklahoma, and possibly the only ones to this day. There are many families who have been through a similar ordeal, or worse. Thanks to the good people at Home School Legal Defense Association, much is being done every day to protect this very basic parental right. Arrest may not happen to you, but your support of HSLDA will help protect families whose rights to homeschool are in danger.