I’ve attended several TEA Parties in the past two years, but long ago, in a galaxy far, far away, there was a different kind of TEA party: it was a fight for homeschooling rights in Texas.

In 1986, I was 14 years old. We had been homeschooling for 3 years, first in Oklahoma where my parents were arrested for it, and then in Texas. In the 80’s, homeschoolers were rare and weird. You think it’s weird now? No, you should have been there when we didn’t dare go to town during school hours, and when people first came up the the silly “socialization” question. Relatives, church members, and neighbors thought there was something wrong with us. They just knew we’d never learn anything or go anywhere.
It was also very unclear to many people if homeschooling was even legal. Especially nosy neighbors and local school districts.
Well, it was legal in Texas, but there were many who wanted to change that. Especially the Texas Education Association, or the T.E.A.
Finally the issue went to court. While the case was pending, a public hearing was called in Austin. My parents got wind of this hearing and we, along with three other homeschooling families, hightailed it from our little town near the Red River all the way to Austin.
There was a lot fueling this mad dash to the capitol:
1) My parents had been completely dedicated to homeschooling from the start. There was never any talk of “trying it out” or going back to public school later. They were sold.
2) My parents had already been arrested for homeschooling, and you can be they wanted to be sure that wouldn’t happen again.
3) Our family was prone to exercise our right to free speech. We marched at all kinds of rallies, and this would be no different.
As with most homeschooling families, we survived on one income, and had little extra. But we packed our tents, sleeping bags, and camp stove and took off. We camped at a KOA campground and ate sandwiches.
And we marched with a crowd of 6,000 for the right to homeschool in Texas. You can read about it here.
A bunch of weird homeschool kids (us) at the Capitol building. 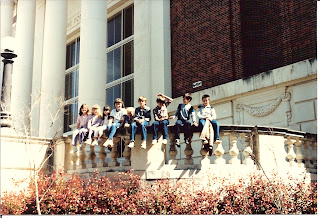 The rally at the Capitol. 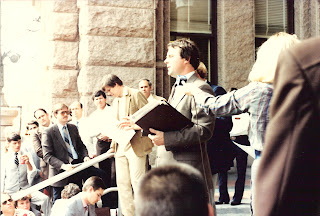 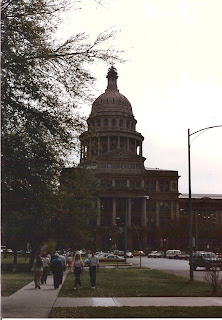 I’m the one in the awesome purple pants. 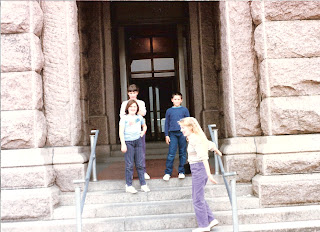 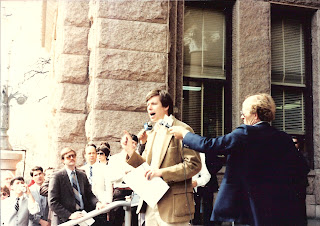 Here’s a newscast from the party: